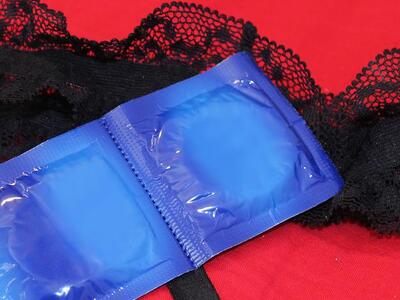 "The very worst are the rich Zurich managers". Grazia* slipped into prostitution at the age of 18. She ended up on Langstrasse. In the interview she talks about extortionate prices for rooms in Zurich, secret Airbnb brothels in the middle of the city and why it's the punters who are the worst here.

Grazia*, you worked in prostitution for years. Are you originally from Zurich?

Grazia: No, I was born in Germany. Like most women who sell their bodies in Zurich or Switzerland, I come from abroad. When I was 18, I slipped into prostitution through a lover boy. And then I came to Zurich via a diversion to Langstrasse.

Could you explain the term "loverboy"?

Loverboys are men who lure women - often young, from difficult backgrounds - into the sex trade with attention, money and luxury. It was like that with me: I had quite a few problems at home at the time and was looking for recognition and love somewhere. I just wanted to get away. Then I met my ex-boyfriend on a dating platform in my early 18s. He invited me to his place, showed up with a fancy car, took me to the best restaurants and the most expensive hotels. On top of that, there was the attention, the security, the love that he made me believe I had. For me, it was heaven at first. I was blown away.

After two or three weeks, he said he had a job for me. I should do it for us, the money would help us. And before I knew it, I was standing with him in the middle of a brothel. Dozens of half-naked or naked women stood in front of me and I didn't know what was happening to me.

How were you received by the others?

At the beginning, everyone was really nice and friendly with me. They said that at first I just had to sit here and smile. Everything would work out fine. But very quickly they told me that I would have my first customer today. My boyfriend then said we needed the money and he would be right behind me. At the same time, he took my mobile phone and all my documents. I didn't know what to do.

How old were you at that time?

Just under 18 years old. I started to sell my body. Then my boyfriend at the time suddenly said: How much will you give me? I had to pay him 3000 euros a week. If I didn't get the sum together, he wouldn't give me a day off.

Suddenly in prostitution - how does that make you feel?

Like the last thing. Suddenly you are just an object, a material thing. You stand there in a row with other women, the john sits in front. It's like he's in the supermarket with a couple of Coke cans in front of him. One has a little crack, the other is nice and straight. I want that one, you can throw the other one away. That's how I felt.

Yes. I know it's difficult to understand. But for me it quickly became almost normal, because it was apparently normal for the other women too. At the same time, my boyfriend at the time kept using the carrot and the stick: sometimes he hit me, then he gave me shoes or took me out for a nice meal. He always said I had to do this for us. He would love me. I wouldn't have to do it for long. Then Corona came.

Suddenly all the clubs in Germany had closed. Then it was: you have to travel and earn money. He sent me to different places abroad and to several punters. And every time I went back to him, he was a bit more aggressive. More and more often he beat me and abused me psychologically. To do this, I almost always had to sleep in the Laufhaus, where I had sex with strange men. I couldn't take it any more.

So you went to Switzerland?

Exactly. I knew from a colleague that everything was still open here. So I pretended to him that I would like to go to Zurich. That I would earn money for him here. He agreed. One morning I sneaked into his room, packed my documents and left. And I knew: I'll never see this man again.

I went straight to the next running house on Langstrasse. And the vicious circle started all over again. There I was told: daily rent 220 francs. In return, I was allowed to offer myself to clients there. I didn't know what I was doing and I didn't know if that was a fair price. After all, Switzerland is an expensive country, that's well known. I also noticed that I was becoming more and more aggressive and unscrupulous. At some point, you do everything for the money, everything to get the salary.

Many people come to Switzerland because they think they can make big money in prostitution here. Is that a realistic idea?

Absolutely not. Also this fairy tale about the noble escort companies. As if you could tell the difference between that and the clubs. A classy club here and a streetwalker there, a golden cake here and only a few crumbs there. As if. There is no difference. After all, it's all about the same service. You always have to pay your share. And in the end you have very little left. With that you have to pay the horrendously high rents, eat. And you have to pay fines when the police fines you.

How can you imagine the life of a prostitute on Langstrasse?

I myself have seen a lot. On the one hand there are the clubs. There you either pay a fixed daily rent or 50 per cent of your earnings. You sleep somewhere in the flats in or around Langstrasse. And you pay an average of 500 to 1000 francs a week. For that you get a bed in a room with three or four other women. In some run-down place.

1000 francs a week for a room? That's astronomically high, even for Zurich.

Of course it is. But the landlords know, of course, that they mostly give the rooms to illegal immigrant women who work in prostitution. They charge crazy prices, but the bureaucracy is completely eliminated. No residence permit, no work contract, no extract from the debt collection register. All documents that no woman in the industry could afford. So you accept the prices. And then you're trapped.

Is there no friendship between the women? Don't they support each other? Against the high prices?

Very rarely. The struggle in the milieu is tough. It's all about money. That's also the reason why I left the first club I went to after barely a month.

Where did you go?

During Corona, private brothels flourished. The scam was to rent other people's flats on Airbnb or Booking. Then the clients would come and go there. Extremely simple and incredibly difficult for the authorities to trace.

Did you also work in such flats?

Yes, everything was organised down to the last detail. Some employees organised the clients by telephone service. And sent them to the address. As soon as the client arrived, I sent an SMS with the message "START" to my employer. At the end, an SMS went out with "STOP". And in the evening a driver came by and took half of the takings from me. All in the middle of Zurich's smart houses.

A few months. Then it didn't work any more. I went back to a club. I had a room there with five other women, bunk beds, metal cupboards. I myself slept on a straw mattress on the floor and a thin blanket - in October in Zurich. I felt like I was in prison.

You describe it as a prison. Didn't you also do the job voluntarily, for the money? After you arrived in Zurich, you could have done something else, couldn't you?

Put yourself in my shoes: You come to one of the most expensive cities in the world with a few euros or even debts to your pimps. You don't know anyone, you have no education, no flat, no one to help you. And the only thing you've ever learned is to earn money with sex. Then you think to yourself: come on, just do this for a few weeks or months and after that you'll have enough money to get out. Unfortunately, that's almost impossible. As soon as you slip in, they have you. With rents and taxes, with blackmail and violence.

Do you think there are women who work in this industry voluntarily?

Very few. There is always an emergency situation somewhere that forces them to take this step. Poverty, a sick family member at home who needs money, a violent husband. Who would want to do that voluntarily? If I wanted to have sex, I could go to a club and find someone there. And not sleep with complete strangers who want something else from me. There is no woman who likes to prostitute herself.

We talked about club owners and landlords. How were the punters to you?

Terrible. Honestly, I haven't been in Switzerland for long, but I've never seen men like these here in Zurich. The worst fantasies, the most disgusting desires. And the very worst are not those who may have little money. The worst are the rich Zurich managers. Because they know: They can afford anything with their money, buy anything.

Aren't you beginning to hate the city and its citizens?

Yes, I do. In the beginning I walked through Zurich, knowing that people who have money live here. And I myself am worth nothing, I thought. Today I walk through Bahnhofstrasse and can only laugh. Then I think to myself: I can't take any of you seriously any more. A parallel society.

And what are you doing today?

The Heartwings association helped me to get out of this business. Today I live in a flat and have a legal job. I remember when I took the first step into my flat. I almost cried and thought to myself, "Awesome. I have my own fridge." I'm finally not dependent on unscrupulous men, clubs or running houses. I make my own money and no one can take that away from me.

* Name changed by the editor